After an absence from the local scene for many years, an unusual Long Island resident has slowly been making his presence felt recently- the turkey vulture, a large avian resembling an eagle or hawk.

Recently spotted in areas such as Bellmore and Hicksville, the turkey vulture has some residents expressing concern; most of that concern simply springs from the fact that most people don’t actually know a great deal about these mysterious birds.

Hicksville resident Pat Monnia spotted a turkey vulture on her block recently, and was surprised to see the large, out-of-place bird in her neighborhood. She immediately contacted the Hicksville Illustrated News regarding her sighting.

“Over a week ago right on my corner in Hicksville I saw a huge turkey vulture eating a dead squirrel…it was quite disgusting, but I couldn’t believe I saw this bird here,” she said. “I was in my car and took lots of pictures with my phone, I actually put it on my Facebook page with pictures because I couldn’t believe it. I was close and it was not afraid of me in the least. Now, people are posting to me that there was an article somewhere they were spotted in Bellmore. Are they a threat to little animals, dogs and kids?”

Luckily, her concerns, while perfectly valid, are nonetheless unfounded; according to Dennis Fleury, education director at Tackapausha Museum and Preserve in Seaford, these unusual creatures, while essentially meat-eaters, pose no threat to most living things. 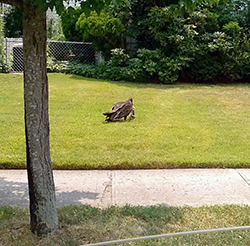 Fleury explained that turkey vultures, while being related to birds that are considered great hunters, are themselves not that accomplished when it comes to finding their meals.

“Some people consider them a bird of prey, as they’re related to eagles, owls, falcons, and hawks,” he said. “But there are others in the ornithological societies that don’t, because while they do eat meat, they primarily eat carrion. Many consider them scavengers, as they don’t really hunt and kill…but if they came across a dead squirrel or deer in the Pine Barrens or somewhere, they’ll be all over it.”

To this end, Fleury said that the turkey vulture depends upon a highly-developed sense of smell to track down and locate its major food source.

“They have a specialized olfactory system that allows them to smell decaying carrion from over a mile away,” he said. “So if there’s something that’s dead in the woods and it’s releasing gas from decomposition, they’re able to detect and target it, then fly there and eat it.”

If there is a general lack of carrion to scavenge, Fleury said, the turkey vulture will either move to another area and search for more, or attempt to prey upon very small living creatures such as mice or songbirds; preferably ones that are already injured.

“They’re cagey, but they’re also opportunists,” he said. “So, they’re really not going to spend a whole lot of time hunting.”

Fleury said that, while turkey vultures may have possibly been more common in the Long Island area many decades ago, man’s encroachment into their territory with insecticides likely contributed to their relative scarcity in the area over the years.

“Once DDT came into the environment in the 20th century, all of the Bird of Prey populations declined…so, if there were turkey vultures here on Long Island, as the DDT built up in the ecosystem, they began to disappear,” he said. “There weren’t seen much here between the 1970s and the 1990s.”

“Then, in the 1990s, we began to get a couple of reports here and there,” Fleury continued. “But now, they’re breeding in the Pine Barrens region in West Hampton, as well as other areas…they’re cropping up, and there’s a nice, steadily-growing population of them. Sometimes you seem them flying in circles out east…their big, black wings are very distinctive.”

However, while indigenous more towards eastern Long Island, Fleury said that there are a number of reasons as to why turkey vultures have been popping up elsewhere recently.

“One, they’re probably moving around, just looking for food,” he said. “Also, this is migration season, so you might be getting turkey vultures that are coming from Connecticut heading south. Also, after Hurricane Sandy, we got reports of black vultures from New Jersey being blown around in the storm and ending up on the South Shore of Long Island…whenever there’s a weather disturbance, they usually get out of range, so to speak.”

Turkey vultures appear to be such a recent phenomenon on Long Island that neither the Towns of Hempstead or Oyster Bay were even aware of them; Town of Oyster Bay Public Information Office representative Brian Devine said that the increased sightings of the large avian creatures wasn’t something that had been called to the Town’s attention as of yet.

“I’ll be honest, up until this moment I’ve never even heard of a turkey vulture,” he said. “We haven’t gotten any reports of them being an issue in Oyster Bay at all.”

If someone encounters a turkey vulture, Fleury said that, despite their low risk factor, residents should treat them just as they would any other wild animal and give them a wide berth.

“They’re probably not afraid of people…they haven’t had much interaction with humans, which is probably why they might not walk away if confronted,” he said. “They’ve just creatures on the fringe of society, eating the waste of animals, and they’re totally harmless.” 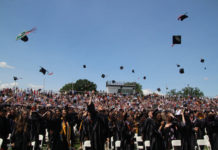 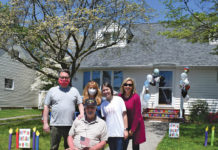 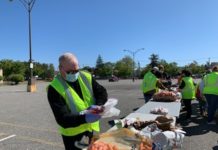