Linda D. Calandrello had no relatives, no job and was always a little unsure of where she would sleep at night. Homeless in Hicksville for the past 10 years, Calandrello relied on social security, off the books jobs and the generosity of others to get by.

The 67-year-old didn’t want hand-outs, but when her life ended on New Year’s Eve, after she was hit by a car while attempting to cross Newbridge Road, dozens rallied to do all they could to help the woman who had become a fixture in their lives, for one last time.

While Calandrello had no permanent address, she did find a home in Hicksville United Methodist Church (HUMC); the building serving as her shelter and the members as her family. In fact, she was at the building just one hour before she passed away.

“We were devastated, it was somebody we had just seen,” said HUMC pastor Rev. Dr. Marjorie Nunes. “She was one of our family.”

Calandrello first began attending HUMC around 2005, invited by a friend who served as the church organist. When the son of her childhood pastor became the new pastor at HUMC, she began attending more regularly.

Timothy Riss served as HUMC pastor from 2005-13, and remembers reconnecting with Calandrello, who was several years older than him.

“She saw my name [as the new pastor] and remembered my father’s name,” Riss said. “She came the first Sunday I was there and introduced herself again. She would frequently come to the church.”

Calandrello continued to attend even as she fell on hard times. She cared for her ailing parents and after their death, the family home in Mineola was foreclosed, leaving her homeless. She began to spend most of her time at HUMC.

“She became part of the church, she was always here,” said Nunes. “She came to all of our services, she came to whatever groups we had. She took this church on as her family.”

Those that knew her described Calandrello as stubborn, at times to her own detriment. She wanted no hand-outs, refusing the offers of others who wanted to help her find a permanent housing solution. She said shelters were unsafe, and instead spent her nights sleeping at Hicksville United Methodist Church.

“We knew it was not a good arrangement, but there were times when it was cold outside and we couldn’t put her out,” Nunes said. “Many nights we found her sleeping in our church.”

For years, church members tried to help Calandrello get social services and into a shelter, but she resisted the idea. Nunes said while they continued to work with different agencies to get Linda help, they also respected her wishes.

“She had most of her faculties so she could still say no. We tried the best we could,” Nunes said. “It breaks your heart…you can’t help someone who doesn’t think they need that kind of help.”

While the church wasn’t able to convince Calandrello she needed permanent housing, they were able to provide for her needs in other ways. Calandrello received meals from the church’s food pantry and attire from their clothing pantry.

Calandrello also found shelter at the Hicksville Public Library, where she spent her days sitting at the last table in the “Q” section, reading books about music or using the computers with her plastic bags filled with newspapers surrounding her.

Rich Vizza, circulation manager at the library, said that though Calandrello was physically small, she always stood her ground.

“She didn’t want anything for nothing,” Vizza said. “What stood out most about her was that you couldn’t help her, she would take no help. The staff tried to do what we could do, but she was a little stubborn.”

Library staff would help in little ways they could, giving her leftover food from events, charging her phone and at her request, holding on to her camera for her when she went into the city on weekends. Every once in a while, Vizza said, patrons would complain about Calandrello and her plastic bags taking up space on the table.

“The library looked the other way because we knew her situation,” Vizza said. “A lot of people didn’t understand.”

Calandrello grew up on Florence Avenue in Mineola, graduating from Mineola High School in 1966 and then the New York Institute of Technology with a BS degree in Behavioral Science, where she volunteered after graduation in the computer lab. She then had a 20-year career working in customer service for a photographer. She was a smart and generous woman, said Nunes, as well as extremely passionate about music.

The former organist at HUMC let Calandrello practice her skills on the church organ, and she hoped to find a job that would allow her to pursue her musical passions fulltime. She often traveled to the city to enjoy music programs at Madison Avenue Presbyterian Church and recently filled in as a substitute organist at a local church.

“She talked about music all the time,” Nunes said. “She was a bright woman who could talk about anything, but most of the time it was about music.”

Nunes spearheaded funeral arrangements for Calandrello, saying that the church thought it was important to take care of her not only in life, but in death. More than 80 people from Hicksville and beyond attended the ceremony on Jan. 9.

“She was woven into our lives’ journey and we wanted to take care of her and give her a decent burial,” Nunes said. “Everyone deserves that.”

Nunes reached out to Beth Dalton at Dalton Funeral Homes in Hicksville, who offered to perform the funeral for the amount paid by social security. Dalton then reached out to Pinelawn Cemetery, where Calandrello’s parents are both buried, who reduced their fee for buying in the family plot. HUMC agreed to cover that cost with donations.

Rae Schopp, a member at HUMC, knew Calandrello for 10 years and describes her as generous and “quite a character.” Like most people, Calandrello came with her own set of challenges, but having crossed paths with Calandrello taught Schopp some valuable life lessons.

“She taught me that we must be generous to all people, and that all people have worth,” Schopp said. “You cannot tell a book by its cover because…there was a lot of faith and generosity in this person.”

Riss agreed, saying that though Calandrello was very different from other people, she was caring and sweet.

“In my life and the life of the church, she was a special visitor sent by God. We didn’t always understand how to help her, but we were blessed to have her and learned a lot from her,” he said.

Donations in Calandrello’s memory can be made to HUMC, which runs a food pantry and clothing exchange for the needy of the community on Friday mornings. 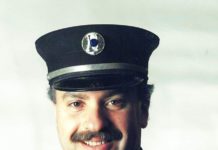 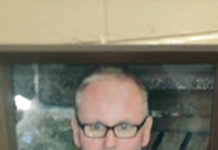 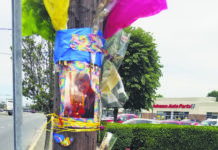