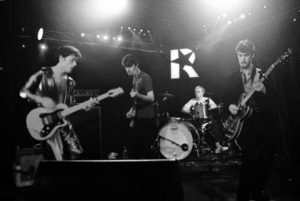 Ask any Long Islander what “Fox Hollow” means to them, and the answer will usually be the famous catering hall in Syosset. However, to a group of Hicksville High School graduates, the name “Fox Hollow” means so much more. It’s the name of an up-and-coming band, with front man Mike Themistocleous at the helm.

Back when Themistocleous and fellow high school swim teammate Joe Oliveto were practicing laps one day in 2013, Themistocleous mentioned that he had always wanted to start a band. Both guys had similar taste in music, so Themistocleous stated, “If you can learn to play a guitar, we can start a band!” Themistocleous, who was already playing rhythm guitar and penning his own lyrics, had the vision of recreating the “glam rock” era.

Once the hook had been baited, Oliveto taught himself to play guitar while attending SUNY Old Westbury as a marketing major. After about a year and a half, he approached Themistocleous, who was now a sophomore as a film and public relations major at LIU Post. Oliveto auditioned with a Led Zeppelin song, and blew Themistocleous away with riff after riff.

It was April 2015, and the two formed “Stray Shadows” while continuing to look for a drummer to round out the band. They played gigs at both LIU Post and Revolution in Amityville, all the while looking to find a drummer who would fit in with their musical group.
Enter an acquaintance, Chris Swift, another Hicksville High School graduate, who was attending Queens College for music education. Swift answered the call and joined for a jam session at their studio in Brookville. He turned out to be a perfect fit for the band. 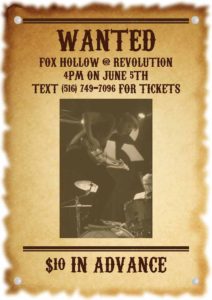 Around the same time, Dan DeLucia, a music performance major at LIU Post who knew Themistocleous, joined “Stray Shadows” as a bass guitarist. With a name change to “Fox Hollow,” the band became well known on the LIU Post campus scene and began to branch out, playing in various venues on Long Island and in Brooklyn.

Fox Hollow, according to Themistocleous, is a band that falls under several different genres. “While the band is very ‘indie-rock’, it falls under the umbrella of the David Bowie ‘glam rock’ and Long Island ‘Emo’ alternative scene, with a little early garage rock. Although we have done some occasional covers of well-known songs, we play mostly original music.”

Recently, when the band played Black Bear Bar in Brooklyn, it covered music ranging from Tom Jones and Pulp.

“The experience at Black Bear Bar was incredible,” said Themistocleous. “There was a stage that you stand on, so you are in a more professional atmosphere. We played recently at Our Lady of Perpetual Hope in Hempstead. The energy was completely different, and we could feel the energy of the audience. That’s a really cool thing.”

According to Oliveto, “We’re an experimental kind of band. We’re always looking for new sounds and new ways to approach the music. We experiment with new tones, and you’ll notice that each song that we play is very different from the last, in order to keep people interested.”

According to Themistocleous, “It’s really about the whole experience. It isn’t just people who are sitting there and just listening to our music. It’s a live performance, which is equally as important as the music we play. We want people to indulge themselves in our music with us.”

Some of the major influences that these young men have cited are Arctic Monkeys, David Bowie, the “glam rock era,” Modest Mouse, and the entire art-rock scene.

“The main goal for us is to play as many shows as we can, in order to get our music out there,” said DeLucia. “Our biggest goal is to get signed within a year. And we’d like to have a goal for a tour further down the East Coast.”

Fox Hollow did a benefit in May for the St. Jude’s Children’s Hospital. Held at Mr. Beery’s in Bethpage, it raised over $700 for cancer research for children. Each of the band members was humbled by the experience, and cited the importance of “giving back.”

Themistocleous is the main lyricist for the band, and according to Oliveto, “The rest of us contribute with music around Mike’s lyrics. Dan writes the bass part, Chris writes the drum part, and I write my own part in. It all comes together in the end, and we’re pretty happy with the results.”

And what is Themistocleous’ take on the music? “The music and lyrics are really very personal. The songs are personal. Once I get out on that stage, in makeup and drag, I throw the glitter and go into a zone. I can feel the energy, and that helps me to connect to other people. They’re having a good time, and that’s what it’s all about. If it’s 10 people or 70, they’re there to hear us play, so we give them what they want.”

Fox Hollow recently played at Muchmore’s in Brooklyn and headlined a show at at Amityville Music Hall. They’re working with SUNY Purchase, SUNY Oneonta and SUNY Rochester to get a few gigs in September.

T-shirts emblazoned with their logo are presently on sale on their Facebook page, @foxhollowofficial. The shirts were created by Michigan graphic artist Ann Escamilla and can be purchased at upcoming shows.

For upcoming show dates and to purchase tickets, visit the Facebook page or via email at foxhollowcontact@gmail.com.

You can hear two of their original songs at www.FoxHollowOfficial.bandcamp.com.