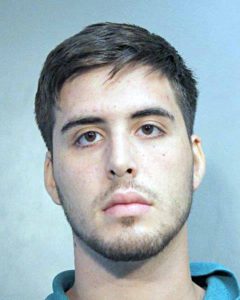 The Nassau County Police Department Second Squad arrested Brian Aimar, 20, of Plainview Road in Hicksville for an assault that occurred on Sunday, Aug. 21, at 5:58 a.m. in Hicksville.

According to detectives, Aimar, while seated in his 2007 Nissan Altima on Dartmouth Drive, was involved in a verbal argument with a 42-year-old male victim. The argument escalated when the victim exited Aimar’s vehicle. Aimar, while still seated in his automobile, reached through an open driver’s side window, stabbed the victim in the chest and fled the scene. The victim called 911 and was transported to a hospital with non-life-threatening injuries.

After an investigation, Aimar was placed under arrest on Cambridge Drive at 6:50 a.m. without further incident. The knife was recovered.

Aimar was charged with second degree assault and criminal possession of a weapon. He was arraigned Aug. 22 at First District Court, Hempstead.