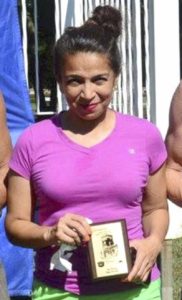 Congratulations to 51-year-old Angela Medalla of Hicksville, who was an award winner at the annual Lynn, Gartner, Dunne & Covello Sands Point Sprint on Saturday, Aug. 10.

The Sands Point course is not an easy onee, although it is clearly a scenic one, showing off the beauties of one of Long Island’s hidden treasures. The Run closes with a tough half mile of trail followed by a really nasty hill just before the three-mile mark and the sprint to the finish.

The race was managed by the Greater Long Island Running Club.

Special thanks go to the title sponsor of the event, the leading Nassau County law firm of Lynn, Gartner, Dunne & Covello. Partner Ken Gartner navigated the course in 27:24, 49 seconds faster than in 2015. John Dunne scored in 46:16, notwithstanding arriving at Sands Point more than ten minutes after the Run had started, and several other runners associated with the firm were also in the field.