Sept. 11 service will be in memory of ex-Chief Terrence Farrell and Honorary Chief George Howard

The Hicksville Volunteer Fire Department Chief Richard Diaz has announced the final plans to commemorate the fifteenth anniversary of September 11. The department will commemorate the somber anniversary on Sunday, Sept. 11 starting at 11 a.m., at the Strong Street Fire Station memorial. The memorial was erected in memory of Ex Chief Terrence Farrell and Honorary Chief George Howard, both who lost their lives while performing rescue efforts on September 11, 2001.

“As I reflect on this day it is with a heavy heart that we honor those lost on Sept. 11, 2001. It is a day that forever changed our nation. Friends and families were left weakened by missing loved ones, yet the spirit and resolve of America grew strong,” said Chief Diaz. “Now is the time to remember those that were taken from us, and to thank those whose memory kept us from falling down. It’s been a long, hard road since 9/11, and it will continue for many years, but, as one nation, we will continue to prevail. The nearly 3,000 innocent men, women, and children who died that day at the hands of the terrorists make 9/11 a day of infamy that should never to be forgotten.” 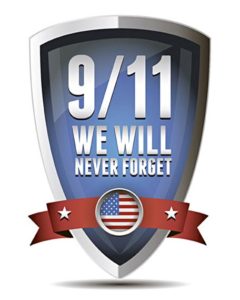 Ex Chief Farrell was a member of Citizens Engine Company 3 and elite member of the New York City Fire Department, Rescue 4. Honorary Chief Howard was an ex-captain of Emergency Company 5 and member of the Port Authority Police Department working out of JFK Airport in the Emergency Services Bureau.

This year, as in years past, Chief Diaz will lead his members, invited guests and members of our community with solemn thoughts and distinct honors by paying tribute to Terry and George.

The ceremonies start promptly at 11 a.m. with a presentation of colors under the American Flag detail by its Hook and Ladder apparatus and feature remembrances and prayers offered for the departed, by Pastor Rev. Jamie Aquilera. The ceremonies generally last about an hour and again this year the department will feature a special remembrance in memory of those Hicksville residents that perished that fateful day.

The Hicksville Fire Department invites the families of those who once called Hicksville home to participate in the program. If any family members are interested they should contact Karl Schweitzer at 933-6445.

About the HFD
The HFD has been committed to providing fire protection for the Hicksville community since 1893.  The HFD aims to provide and maintain suburb fire protection and prevention services today, while anticipating the fire concerns of future generations.  The HFD provides 24-hour coverage, 365 days a year, all fully staffed by professional volunteers at no cost to our residents. For more information, visit www.hicksvillefd.com