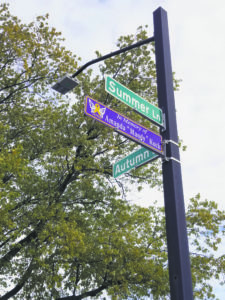 “On behalf of my colleagues on the Oyster Bay Town Board, we are very proud to dedicate this street in memory and in honor of an incredible young girl, Mandy Kuck,” said Saladino. “Despite being taken from us at a very early age, Mandy left behind a lifetime legacy of caring, compassion, joy and selflessness. Even when she could no longer communicate, she taught those around her to be strong. She taught us how to be brave and she taught us to not give up in the face of adversity. Her perseverance continues to be an inspiration to us all. Her legacy will forever endure because of her faith, courage and the smile that brought happiness to everyone. Today, we honor her in the form of an incredibly charitable organization created in Mandy’s memory by her parents.”

On the day Mandy was diagnosed with DIPG, Mandy’s parents—Kimberly and Thomas—soon came to realize that there was no government funding to pay for the research needed to find a cure. Kimberly and Thomas were given staggering statistics, and they were informed that Mandy’s prognosis was terminal. Mandy underwent six weeks of radiation therapy at Memorial Sloan Kettering Cancer Center, but passed on Jan. 25, 2016, just four days after her fifth birthday.

In Mandy’s memory, Kimberly and Thomas Kuck created Mandy’s Mark, The New York Chapter of The Cure Starts Now, a foundation dedicated to DIPG research. Many medical experts believe that the lessons learned from fighting DIPG may provide the critical first steps in winning the battle against all forms of cancer. The Town of Oyster Bay commends the Kuck Family for creating and supporting this incredible organization in Mandy’s honor.

—Submitted by Town of Oyster Bay