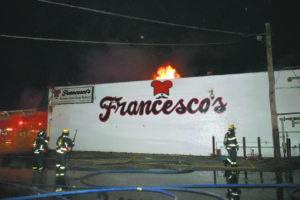 Francesco’s Bakery, a beloved Hicksville staple, went up in flames around 11:30 p.m. on Sunday, April 28, and burned into the early morning until the nine responding fire departments got the blaze under control by 3 a.m.

The Eighth Precinct Police, the Nassau County Fire Marshal and fire departments from Hicksville, Bethpage, Farmingdale, Wantagh, Syosset, Jericho, Westbury, North Bellmore and Massapequa were all at the scene to respond to the emergency. Nearly 19 fire apparatuses and 100 firefighters worked to put out the flames. 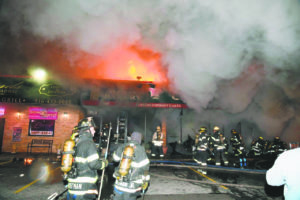 No injuries were reported, although one Hicksville fire fighter was transported to NUMC for smoke inhalation. No Francesco’s employees were inside the building at the time of the fire. The bakery was destroyed and adjacent Legends Bar and Grill received minor smoke and water damage.

At the time of publication, the cause of the fire is undetermined, but an Arson Bomb Squad investigation is ongoing.

In a statement, Antonio Guerrieri, son of the bakery’s owner, said that the family will be rebuilding as soon as they can and will double down on their baking efforts at their North Massapequa location.

Francesco’s Italian-American Bakery is located at 640 S. Broadway in Hicksville.