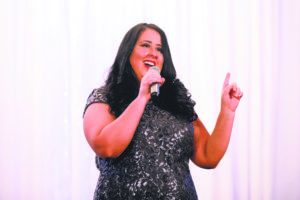 “This is my Superbowl,” said Alexa Sheryll of the Miss America pageant.

Ever since she was a young girl, Sheryll has been captivated by the glitz and glam of the pageant world. The Hicksville resident even convinced her parents to let her compete in a pageant at just 9 years old—an effort she fundraised for by selling candy bars outside of a local supermarket.

She didn’t win at that competition, but the now 25 year old did not let that experience keep her down. This March, Sheryll spent a weekend at the Hyatt Regency in Morristown, NJ, to compete in the Miss New York/Miss New Jersey pageant under the USA National Miss organization—and won. Sheryll was crowned Miss Empire State and earned her crown and sash, along with recognition from the Town of Oyster Bay and the designation of April 16 as being “Alex Sheryll Day in the Town of Oyster Bay.”

“We went into it really just wanting to have the experience,” said Sheryll, who entered the pageant with her boyfriend’s cousin, a frequent competitor in the pageant world. “I just want to not get last place, I just want to have fun. That’s all I care about, is living my dream and doing something I always wanted to do.”

And live her dream, Sheryll most certainly did. Along with being crowned Miss Empire State, which is an audience-voted title, Sheryll earned second runner-up for Miss New York and also earned the Miss Congeniality award, the Spokesmodel award and the Outstanding Participation award. 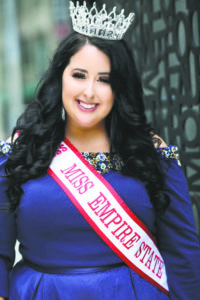 “I’ve dreamt of that crowning moment forever and I still cry while thinking about it,” Sheryll said. “I just can’t believe that this all is actually happening to someone like me.”

With not only her own friends and family in attendance, but her boyfriend’s family as well, Sheryll had all the love and support she could have needed to hold her confidence as she took to the stage. An interview and talent, evening gown and runway competitions were just a few of the events that led Sheryll to success.

“I came home and I cried for a good hour of just happiness,” Sheryll laughed. “I just couldn’t stop crying. I really thought I would wake up in the morning and it wouldn’t be real. But it’s real.”

As Director of Community Affairs for the Town of Hempstead, Sheryll is heavily involved in politics and uses this to her advantage in pageants when discussing her passions. With the goal of USA National Miss being to encourage young women to live a life of service and empowerment in their community, Sheryll’s career and personal beliefs fit in perfectly with the pageant’s mission. Sheryll’s own platform is the importance of voting in local elections and voters’ rights, and she frequently visits elementary schools to speak out against bullying.

With the USA National Miss national-level pageant coming up in July, Sheryll is busy preparing and fundraising for the opportunity of a lifetime. The competition will be held in Disney World in Florida, and she has enlisted the help of a coach to nail down her walk and the way she presents herself.

In between her recent pageant win and her upcoming competition, Sheryll has been speaking at workshops, attending conferences, visiting students at schools, volunteering with the Ronald McDonald House and, of course, fundraising for her trip down to the Sunshine State.