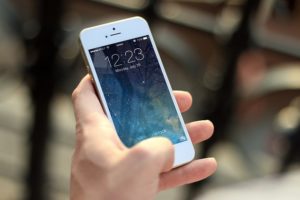 Like many of you who are constantly battling the nemesis of time limitations, I often find myself employing the use of voice text in order to send a message to family or friends. I’ve noticed that one must enunciate words properly, for sometimes what is transcribed is completely different from what one has spoken. Siri is not the world’s best secretary, by any means.

Case and point: Several weeks ago, my daughter sent me a quick text about something that had happened in the course of her day. I was walking across the parking lot of Blink Fitness, and the glare on the phone was so severe that it caused me to squint. Time was also a limiting factor, so I pressed the center button on my iPhone and asked Siri to send a text to my girl. I also wanted to share my goings-on, especially since I had just used the assisted dip machine at the gym for the first time. The conversation went something like this:

Me: You’re going to have to show me the assisted dip machine. I looked like an idiot on it today.

Me: And the one with red and black ropes over the head. Because I almost fell on my face LOL.

Me: (Sends picture of red and black braided rope, branded “Rope of Hell”)

Me: Are you allowed to use the cyst chicken dip machine for your legs?

Daughter: LOL THE WHAT

Me (after yelling at Siri in the voice text mode): Chicken dip cyst

At this point, I had to pull to the side of the road to clarify that I was not using machines that extract cysts from chickens or make the cysts into dip. My daughter phoned me and laughed so hard that I couldn’t hear a word she said.

This is not the first time I’ve had an issue with Siri and her poor message taking. I was in the Target parking lot at the beginning of May, and Hubby wanted to discuss a recent Game of Thrones episode. As I put the car in reverse, I asked Siri to send him a quick response to tell him that I was driving. I also wanted to let him know about Noah Syndergaard, who became the seventh pitcher since 1920 to homer and pitch a 1-0 shutout the day prior:

Him: What did you think of the episode?

Me: It was pretty good, but I wasn’t as thrilled as I thought I would be. Did you hear about snot’s guard?

Me: Snot’s guard. You know, the pitcher from the Mets.

I have taken to legitimately spelling words, just so Siri can transpose them properly. Sometimes it works. Most of the time, it doesn’t. Ah, technology. The boon and bane of our existence at once.

I’ve currently stopped using the voice text aspect altogether, even when I’m in the house. I’ve decided that, according to Siri, I must “keep an ion” my texts to make sure that she’s taking dictation properly and not making me look like an idiot. Siri, you’re fired.