Heading south, just past where 106/107 splits in Hicksville into their individual routes, 107 splits again into Jerusalem Avenue and South Broadway. At the tip of this roadway divide is a small parcel of land known as Kennedy Park, complete with a “Welcome To Hicksville” sign, a large green train, a covered gazebo and a fountain.

The park is one of Hicksville’s charming green spaces, but as of late it has been a point of concern among residents and authorities as a few members of the local homeless population have attempted to make the park a place to stay.

“What we do is we send over a call to the Department of Social Services (DSS) and we send them over to whatever we find in situations like this,” explained Nassau County Legislator Rose Walker. “We get the MTA police involved since it’s by the railroad, we get our DSS people involved, we get the police department involved and, of course, we get the town involved in cleaning everything up.”

In recent months, the park has been noticeably dirty, specifically, trash and other litter has become increasingly prevalent around the Kennedy Park area. Whether it be from those seeking shelter there or from passersby dropping their garbage in an inappropriate place, the space had become unsightly.

On Thursday, July 18, Walker publicly addressed the issue on her Facebook page, stating that she had made calls to the Nassau County Police Department’s Second precinct and the Town of Oyster Bay Parks Department “regarding the unacceptable situation at Kennedy Park.” She further noted that fountain repair and park cleanup was underway and would be completed by the weekend. 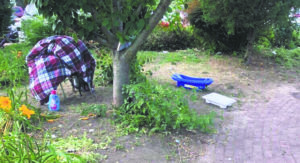 As promised, on Monday, July 22, the park appeared to be in a state of extraordinary repair. Walker gave an update to residents on her Facebook page noting that she visited the premises and saw that the fountain was drained for scrubbing and power washing before being refilled. She stated that overgrown shrubs and trees had been removed “and a total cleanup is underway.” She said that the gazebo was also to be power washed as further cleanup continued. She promised concerned residents that she will update her page as progress is made.

Town of Oyster Bay Supervisor Joseph Saladino has also addressed Kennedy Park’s cleanup on his Facebook page. Last Wednesday, the supervisor posted an update stating that town crews are continually cleaning up the area and the gazebo will receive a fresh coat of paint by early August.

As for the homeless population seeking refuge in the park, Walker said that while legitimate shelters are in place around the island, those in need are refusing to go. 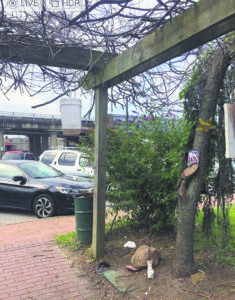 “It breaks your heart for people that don’t have a permanent place to call their home, and unfortunately they decide to make whatever they chose to be their home,” the legislator said. “There’s many, many shelters they can go to, some of them just don’t want to. They refuse to go to a shelter even when DSS is there, they refuse to accept social services that would help them and could help them. And if they need other services, we’ll help them with that, but some of them just don’t want to do that.”

SAVE our Hicksville, a Facebook page administrated by Lorraine Burnard and dedicated to alerting Hicksville residents of less-than-acceptable conditions around the hamlet, posted about the dire conditions of the space on July 17. Photos were shared depicting a fountain full of green water and floating trash, litter scattered around the area and hammocks and blankets set up, indicating individuals were staying for prolonged periods of time.

“I was appalled to see the condition of the park get worse over the years,” said Burnard. “The residents should not have to ask for town property to be maintained, this is a shame.”
However, with community members rallying together to ask the town to clean up the park, Burnard praised resident’s efforts in making a change finally happen. 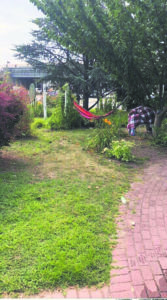 As time goes on, Kennedy Park will receive a sharp increase in attention as local authorities are made aware of the homeless issue and the need to keep Hicksville’s public spaces attractive.

“There’s a tremendous, noticeable difference and you can just ride by and be able to tell if someone is hanging around there that shouldn’t,” stated Walker about the park’s ongoing cleanup efforts. “We need to make sure we stay on top of it and we need to make sure we keep it clean and keeping these shrubs cleared out, out of the way so it’s much easier to maintain. I’m sure it’s on everybody’s radar—certainly mine—and hopefully it continues to be a welcoming first entrance into the Hicksville community.”

What do you think of Kennedy Park? Let me know your thoughts at aeichler@antonmediagroup.com.