For the past 50 years, members of the Hicksville Fire Department have leaned on ex-Captain Gerald Nolan for his expertise, dedication and professionalism. Nolan’s service did not go unrecognized as the Town of Oyster Bay recently awarded him a citation for the half century of service he’s provided ever since he originally joined Emergency Company No. 5 back in 1969. As someone born and raised in Hicksville, his roots in the community run deep and go as far back as his mother’s father.
“My mother was born here in Hicksville and my grandfather used to have a farm on Newbridge Road. They had a 100-acre potato farm and eventually they sold it all out to [William] Levitt,” he said. “I’m the baby out of four kids. I have two brothers, Richie and Alan, and a sister, Janis. My mother was a stay-at-home mom and my dad owned a gas station in North Bellmore.”

Growing up in such a tight-knit atmosphere, Nolan’s path to the firehouse was rather organic and straightforward.
“A couple of friends and my brother Al were members and we all hung out together. I used to go down to the firehouse and I knew most of the guys,” he explained. “Back then, they pushed the age up to 21 to join. It used to be 18, but with Vietnam, they pushed the age up to 21 because everybody was being drafted.”

With the war in Vietnam raging, Nolan also did his part, signing up for the Naval Reserve the same year he joined the fire department. After finishing probation with the department, he went on active duty in the Navy for two years. Assigned to a cruiser out of Newport, RI, his travels took him to the Mediterranean, Guantánamo Bay and an around-the-world tour that took six months to complete. He returned home between the fire department and work as a purchasing manager for a local manufacturer—a job he also held for 50 years until retiring this past May. During his time fighting fires, Nolan saw plenty of changes, specifically with the tools his brethren have used to save lives and get the job done.

“The biggest changes I’ve seen with the fire department is the way the equipment changed. Pumpers got bigger and went from being 1,000-gallon pumpers to 2,500-gallon pumpers. The hoses also got bigger. When I first joined, they didn’t have Scott Air-Paks, which are these self-contained breathing devices that are kind of like scuba gear, except for fighting fire. They only had one on the truck, which was for the officer. Now, everybody has to have one,” Nolan said. “If you didn’t have one, you went to the nozzle right where the water was coming out and sucked in the air where the water was going out and it kind of acted like a filter of fresh air and you would breathe that. They became what they called smoke eaters. You fought fires without Scott Paks, stayed low to the floor and just fought the fire.”

Nolan’s wife Edie, who works for the Hicksville Fire District, has been a significant pillar of support for him. The couple have been married for 39 years and their connection was also made through the fire department.
“We met through Charlie Huron, a friend of mine from the firehouse. I met his sister a couple of times and we went out. Our first date was an Islanders game that I believe was on Feb. 3, 1980,” Nolan recalled. “From there, we got married and had four children. Our older son is George, who lives in Arizona. Next in line is Kevin, who lives in San Diego. Then Danny, who lives in Haymarket, VA, and my daughter Jena lives in Carle Place.”

Nolan still works as a member of the fire police in the Hicksville Fire Department. And while he waits for his wife to retire from her job, post-retirement plans include playing lots of golf, hanging out with his grandchildren and the rest of the family, and plans for some as yet undecided trips around the United States. As for the community of Hicksville, the veteran smoke eater cherishes the friendships he’s made over the years and the positive environment it’s provided to both him and his children as they were growing up. He still shakes his head over how fast time has passed.

“You don’t believe it’s you [being honored]. You believe you were part of all this for 50 years but it doesn’t seem like you did 50 years,” he said. “Then when you look back, you see that times really have changed.” 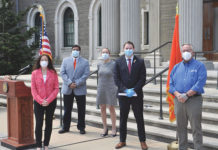