While perusing a Hicksville-oriented Facebook page, I found a post that caught my interest. It related to the decades-old tradition of Santa Claus on the Hicksville Fire Department’s conventional fire truck and the throwing of popcorn balls by volunteer firefighters who ride along with the “Man in Red.”
Popcorn Ball Sunday has been a well-loved tradition since about 1960. Each Thanksgiving weekend, while Hicksville residents like my husband set up Christmas décor, Hicksville firefighters from all the departments ride up and down the blocks and toss popcorn balls to residents of all ages. It’s quite a hit, especially on our street, where our neighbor sets up several open-holed targets in the hopes that someone can score a ball through the cardboard target. Children eagerly wait on street corners to catch popcorn balls from The Popcorn Factory. Sometimes “Rudolph” is on the truck, and sometimes we catch a glimpse of what we’ve always thought was Pepino, The Christmas Mouse.

The post on the Facebook page mentioned that the fire department had opted to give out popcorn bags instead of balls this year, which brought dismay to many of the residents who commented. While it couldn’t be ascertained whether the switch was due to cost constraints or health concerns, it seemed that everyone wanted the “Popcorn Ball Sunday” tradition to continue.
A local resident mentioned that popcorn balls weren’t always tossed to waiting Hicksville children. Over the years, the fire department attempted to hand out lollipops and candy canes, though I am certain that a situation such as this would result in sad cellophane wrappers filled with broken candy and sugar dust. HFD always returned to the humble popcorn ball. Although in recent years, The Popcorn Factory’s popcorn ball was wrapped in a beige-yellow cello wrapper, when we first moved to Hicksville, the wrappers were a festive red and green. 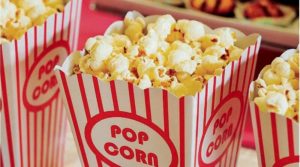 Many years ago, when we first moved to Hicksville, we found the tradition incredibly heartwarming and new. We had lived in other towns of Oyster Bay, yet had never encountered the wonderful idea that was “Popcorn Ball Sunday”. When I first heard the sirens on our first Sunday after Thanksgiving in our new home, I honestly thought it might have been for a true fire. Hubby was outside, setting up his blow-mold collection. He came into the house, his face in an ear-splitting grin as he beheld two popcorn balls, one red and one green.
Our daughter was a tremendous fan of Popcorn Ball Sunday, even as a toddler. The moment the sirens went off, she ran to the front door, her shrieks of “Hurry, Mommy, I’m going to miss Santa!” piercing my ear as I attempted to zip her into her coat. Her first year, we got six balls. The last year she came out to see the truck, Santa left quite a bit more, thanks to a family friend and firefighter who has always been very near and dear to our hearts.

My husband and I recently discussed the switch to popcorn bags, which brought him a great deal of disappointment. Although he nearly cracked a tooth on the sugary popcorn sphere, I would often find him in the kitchen, sharp knife in hand, as he neatly dissected the treat into several slices that were easier to chew. It defeated the purpose of the shaped confection, but nobody was losing a tooth in the process.
I was trying to figure out how the firefighters would toss the bags from the truck. If they were too lightweight, wouldn’t they just land in the street, where kids (and adults) could easily be hurt by a moving vehicle that couldn’t be seen from around the truck? I joked to my husband that perhaps they needed to attach rocks to the bags to give them a little weight, so they would easily make the toss to residential lawns along the route. The bags may even be heavy enough to stick the landing. Only time will tell.

Whether popcorn balls or bags, it’s a generosity offered by the entire Hicksville Fire Department for which we should be incredibly grateful. Thank you, HFD, for spreading cheer to residents, for offering open houses for residents to learn about fire safety, and for coming to our rescue whenever we need help. You are all our local heroes. It isn’t any wonder why you’re traveling with the most generous guy who ever donned a suit of red. 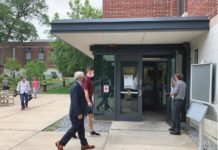 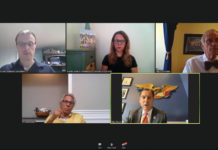