Does anyone remember the Golden Loaf Bakery?
The reason I ask is because earlier today, it came up in conversation. Mom had mentioned how much she missed LaRosa Deli, which was literally three blocks from her house. She reminisced about the hearty heroes, the delicious bread and the oh-so-fresh cold cuts that she often purchased after church. She mentioned that my sister had gone to Fred’s Deli on Center Lane in Levittown, where the food was tasty and fresh, but Mom was clearly missing the old days of great Italian salads and the crunchy heel of a loaf of bread that she could dunk in her diet Coke. It was then that she mentioned how Dad used to go to Golden Loaf, a bakery on Wolcott Road that only sold Italian bread and rolls. Mom mentioned that it was the best bread she’d ever eaten.

I decided to poll the masses about the bakery, since I was a wee one at the time of the bakery’s existence. “You Know You’re from Levittown,” a page for those who have moved from the area or continue to reside within Levittown’s perimeter, was the page polled. I received an immediate response from the page’s members.

Most folks recalled the bakery, which oftentimes had a long line of waiting patrons who had just gotten out of Sunday mass. Some people mentioned the “bag of rolls or bread,” where the baker removed hot baked goods from the oven and handed over to eager customers. It was mentioned that the baker often laughed when a customer burned their hands on the bread. Memories included the long wait in line with the aroma of fresh bread, while others talked about delicious, flaky Kaiser rolls and “the best bread” they’d ever tasted. Someone mentioned the big metal bread racks that used to stand at attention on the sidewalk, which jogged a distant memory for me.

Every Sunday after church, we drove home to change into our “comfortable clothes” and drove to my grandmother’s house in East Islip. We often took Wolcott Road from our house to the Southern State Parkway, which was the straightest path to her home. I remember those shiny metal trays that stood on the sidewalk and the fragrance of crispy, yeasty goodness as we drove past the bakery.

Early every Sunday morning, before my sister and I were even out of bed, Dad drove over to Golden Loaf to grab a hot Italian bread and some rolls for sandwiches. I remember the long brown paper bag that held the bread, but I don’t remember much more than that. Mom told me, “You and your sister were very young. I don’t know how much you remember, but that bread was so delicious.” The thought of a crispy bread, hot from the oven, can still make my mouth water. According to Mom, Golden Loaf was gone from the Levittown scene in the 1970s.

I’m presently growing three sourdough “starters” in my front window, with high hopes for some delicious bread, hot from the oven. Last week, I made over a dozen flatbreads, which didn’t last the better part of a week. They were delicious, with a crispy exterior and a fluffy interior. I began a batch of dough earlier today for a large sourdough bread that I hope to have in the oven by tonight. I’m looking forward to the aroma of fresh bread as it wafts through the house, as well as the feel of a slice of warm bread with steam that rises into the air as I cut into it. While it might not be the stuff from Golden Loaf Bakery, I’m hopeful that it will evoke the same memories of fresh bread in a long brown bag that tasted just a little like a slice from Heaven. 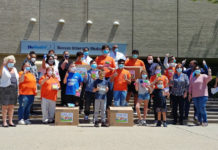