I have often found that social media can be both a blessing and a burden at times. While it’s a wonderful way to stay in touch with those who live far away, one can often be sucked into what is fondly known as the “social media vortex.” Oftentimes, people talk about how their intention is to be online for “just a minute.” When they glance at their watches, they realize that they’ve lost an hour of their precious time. The importance of taking an occasional break from it cannot be stressed enough, especially when one’s news feed is taken up by disturbing photographs, negative talk or political bias that can have folks running for the hills.

I took a quick break from several platforms several months ago, which really consisted of staying away for a day. I’m a social animal by nature and with the mandated quarantine by government officials, I found it vital to keep in touch with the outside world. I gravitated towards happier groups of folks who took to social media to reminisce about good times and fond memories from their childhoods. I’d like to thank Dawn, who is the inspiration for today’s column.
One of my former classmates from elementary school posted a photograph of a mood ring and related a sweet story about how grateful she had been to receive one. She still owned the ring and it still worked, which made her that much happier. She asked if anyone out there in Facebook-land still owned their mood rings and got quite a few responses back. I thought back to the last time I cleaned the attic.

When I found my old jewelry box from childhood, I leafed through it gingerly. Most items were so worn that to touch them would bring irreparable damage. I found a folded tissue, and inside lay my old mood ring. The band had separated from the stone, but as I held the stone in my palm, I was delighted to find that it still changed colors. Our daughter, who was a young teen at the time, was amazed by the piece of costume jewelry that was purchased at Woolworth’s in Levittown, from a divided box by the register. As she warmed the stone in her palm, her eyes gleamed at the thought of what her mood could be. The stone shone bright blue, which meant that she felt calm, at peace and was perfectly at ease. As she handed me the stone to return it to the folded tissue, she asked about any other cool jewelry that might lurk in the box.

As we opened each small box, I told a little story about each of the items inside. One box held a copper bangle with Native American symbols and a small turquoise stone on its face. Another box held my father’s brass compass, which still had the original green glow paint on the tip of the magnetic needle. Yet another box held a small sterling silver chain with a silver seashell pendant. Inside the heart of the pendant was a small white pearl. I received the gift from Michael, who was my best friend and lived across the street from my childhood home. The only other items inside the jewelry box were a pin that said, “Blue Dragons Beat Carey!” and an eraser of W.C. Frito. My daughter thought the eraser was hilarious. She didn’t understand why a blue dragon would want to beat up someone named Carey. I had to explain that Levittown’s Division Avenue High School’s team mascot was a blue dragon and the football team was playing Franklin Square’s Carey High School at Homecoming that year. Disinterested, she headed downstairs while I continued to sift through my childhood memories.

For a short time, mood rings attempted to make a come-back. They could be found in stores like 7-Eleven and teen clothing shops in local malls. That Christmas, our daughter found a small mood ring in her stocking in a small, white jewelry box. Her smile sparkled as brightly as the domed stone that sat on the dainty silver band. It has since gotten lost somewhere in the house. To this day, she still talks about the “ring that turned black if you were pissed off.” 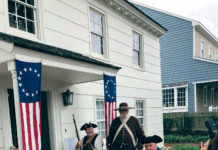