If you ask G.E. Smith to describe himself as a musician, he humbly answers, “I’m a bar band guy.” And while there’s truth to this assertion given the fact that he started out playing in saloons and taverns as an 11-year-old growing up in Pennsylvania, it belies the major events/jobs he’s been a part of for the past four-plus decades. He held down the guitar slot as a part of Daryl Hall and John Oates’ band during the duo’s 1979 to 1985 commercial heyday, was the Saturday Night Live band leader for a decade and been the musical director for a number of significant musical events including the 1992 30th Anniversary Concert Bob Dylan Celebration at Madison Square Garden.
Smith has also been an in-demand hired hand for a number of music industry titans including Bob Dylan, Mick Jagger, David Bowie, Buddy Guy and Roger Waters. But amid all these storied opportunities, Smith is proudest of Stony Hill, the new album he released with veteran soul singer LeRoy Bell, the kind of vocalist the man born George Edward Smith has spent roughly three decades seeking out.
“I was listening to a playlist of stuff by my wife Taylor Barton and LeRoy came on and I heard his voice and said, ‘That’s the guy I’ve been looking for,’” Smith recalled. “I’ve been looking for a great singer for 30 years. Singers and drummers are the hardest thing to get because if they’re that good, they get snatched up before they ever get out of their hometown. I asked who that was and she said it was this guy LeRoy Bell from Seattle. And then she got in touch with him and invited him to come out here to Amagansett to our house and he came. We sat down and started to play and he had just written a song ‘America,’ which is on the Stony Hill record. We went right into the studio within two days and started to record.”

Bell’s background is equally impressive. The nephew of legendary Philly soul producer/composer/arranger Thom Bell, the younger singer-songwriter cut his teeth with former creative partner Casey James in the ‘70s, writing songs for a number of artists including The O’Jays, The Spinners, Teddy Pendergrass and Jennifer Lopez. Early success for the duo came when Elton John cut the Bell-James compositions “Mama Can’t Buy You Love” and “Are You Ready For Love,” which appeared on the 1977 EP The Thom Bell Sessions. LeRoy Bell was a finalist during the 2011 season of the American version of The X Factor and most recently has been the leader of LeRoy Bell and His Only Friends.

This recent collaboration with Smith found the 69-year-old singer-songwriter teaming up with his fellow Pennsylvania native between January and October of last year. During this time, Smith and Bell recorded a bulk of material, winnowing down 11 for this record that was produced and arranged by Smith and whose theme is an in-depth look at where we stand as an American democracy. 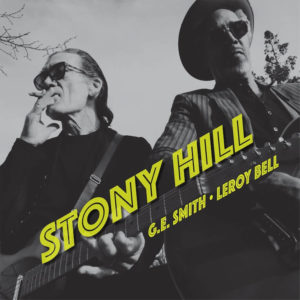 While the title shares the same name of where Smith and Barton live, it also signifies “the struggle of pushing the rock up that hill.” Bell sings with a croon that’s got the slightest edge of grit. The lion’s share of songs were penned by him and contain substantial fare ranging from the aforementioned “America” and weighty couplets like “Disillusion/mass confusion, our constitution—they’re tryna burn it down” to “Let the Sunshine In,” a more optimistic tune goosed along by subtle organ runs and harmonies as Bell pleads to “Let the healing being/And spread it all around.” Smith’s producing/arranging instincts make for an album that is a crossroads of rock and soul and includes a pair of covers that have been longtime staples of his live set—the traditional “Black Is the Color (of My True Love’s Hair)” (best known by way of Nina Simone’s seminal version) and a reading of Buffy Saint-Marie’s “Codine,” a nod to the opioid epidemic. Both songs date back to Smith’s early teen days learning his craft.

“I’ve been playing those songs for many years,” Smith said. “But to have a really good singer singing ‘Black Is the Color,’ it ups the value of the song I think. It’s a great old song that came out of Kentucky. I think the third verse says, ‘I got to Troublesome to mourn and weep.’ Troublesome Creek is a little town in Kentucky. Back in the 19th Century, the guy who wrote it was probably from that area and that’s probably where that song came out of. ‘Codine’ is a Buffy Sainte-Marie song and I saw her when I was about 10 or 11 years old and she did that song. It made a huge impression on me. Both of those songs I warped over the years and arranged so you could play them in bars cause I’m a bar band guy. I’ve always been in bar bands. I love to take those old songs and rock ‘em up. It makes them accessible to another group of people that might not have heard them in their original arrangement.”

Relationships and being in the right place at the right time have been a hallmark of Smith’s long and strange musical path. He got his first guitar, a 1930s Collegiate guitar (“a cheap Chicago-made instrument”), when he was four and spotted it hanging on the wall in the basement when he accompanied his mother downstairs while she did laundry. Belonging to this Uncle George (who the younger Smith was named for), the guitar was gifted to Smith by his mom. While he spent the next three years “dragging it around the backyard and banging on the strings to get them to vibrate,” that same Uncle George had a girlfriend who gave him a Martin guitar when Smith was seven. More importantly, that girlfriend’s 14-year-old Irish nanny taught Smith how to fingerpick along with a handful of traditional Celtic songs. 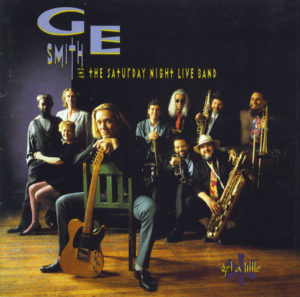 By the time Smith was 11, he was playing bars and eventually was playing Mount Airy Lodge in the Poconos when he was 15 as a member of Bob Newman and the Starlight Orchestra, backing up the likes of Red Buttons and Carmen McCrae. It was here he received significant enlightenment from his then-band leader.
“I was talking to Bob Newman the bandleader one time after a show and he said, ‘You’ve got to have big ears,’” Smith said. “He meant, you have to listen to every kind of music and to not limit yourself to just the one kind you’re in love with. I was in love with the Stones and the Yardbirds and The Who. He said you have to have big ears and listen to everything. That’s the best advice I ever got.”

Smith’s musical versatility has served him well, particularly given the fact that he estimates that he has “a couple of thousand songs he knows that people recognize” rattling around in his head. It’s allowed Smith to bond with Hall over their common love of The Dells and Delfonics before the latter hired the former to play guitar for him and Oates, be a band leader for a number of Kennedy Center functions honoring Willie Nelson and Dylan and serve the same role for the Mark Twain Awards, of which one of these events paid tribute to his old SNL boss Lorne Michaels. And while it would be easy for Smith to rest on his laurels, it’s his current collaboration with Bell that he’s most excited about.
“I’ve played on a lot of good records—great songs that were recorded and not hits and bad songs that were hits,” he said. “So you can never tell. I’m really proud of this Stony Hill record and I love working with LeRoy. To me, it’s really important to have that combination—LeRoy is black and I’m white—that’s obvious. But that’s the combination in American culture, especially in American musical culture. That’s what makes it great. That combination of what started in the 18th and 19th century. What the slaves brought from Africa and the music that the lower-class people that came from the British Isles, Germany and Italy brought over. When it all intermingled, that’s what made American music and what’s great about it—that combination.”