Social media platforms are a necessity in today’s business world. Businesses encourage folks to interact via their social media pages. Restaurants take to platforms like Instagram and Facebook to market their products and offer mouthwatering photographs of their menu items.

As Facebook CEO/Co-Founder Mark Zuckerberg Facebook once stated, “Think about what people are doing on Facebook today. They’re keeping up with their friends and family, but they’re also building an image and identity for themselves, which in a sense is their ‘brand.’ They’re connecting with the audience that they want to connect to. It’s almost a disadvantage if you’re not on it now.” Love him or hate him, Mr. Zuckerberg makes a valid point:If you aren’t participating in social media platforms, perhaps it might be time to try one.

One of the reasons why I participate in social media platforms is to keep in touch with family and friends. Finding out about the goings-on in our town is another great reason to be a part of this growing influence. Just recently, I learned of the Hicksville PTA Food Drive and the boxes placed outside every elementary school in town for the less fortunate. I’ve heard about happy moments, sad time and wonderful events that have been offered within Hicksville and the surrounding areas.

One of the most interesting items on Facebook that I’ve noticed is the reminiscing over favorite family dinners. A friend posted a photo of an aluminum tray that contained three pieces of fried chicken. In separate compartments in the tray, there were apples in a corn syrup “gravy”, mashed potatoes with a smidge of “butter” and a combination of bright green peas and equally bright orange carrots. I present to you the Swanson TV dinner.

TV dinners were something that parents often served as a “quick meal.” These were usually reserved for evenings when Mom didn’t feel much like cooking or for times when other appointments prevented a parent from serving a home-cooked meal. With options such as hot dogs with baked beans, Salisbury steak or international items like Polynesian Dinner or spaghetti and meatballs, one could have a “hot cooked meal” without the muss and fuss of pots and pans.

My favorite TV dinner meal had always been the Salisbury steak. True, it was like a long, compressed hamburger, but it had a tasty flavor and a thin brown gravy that could disguise the definitive cardboard taste of those hard mashed potatoes that were often dried around the edges. My sister often enjoyed the chicken dinner, while Dad enjoyed a turkey dinner that hadn’t taken hours to create. He also preferred the “Hungry Man” TV meal, which offered larger portions. Mom didn’t really have favorites, so she ate whatever appealed to her in the moment. Please note that due to the flimsiness of those aluminum trays, we never ate dinner in front of the TV.

I’ll never forget when Mom purchased the “Spaghetti and Meatballs” for my sister and me. I couldn’t wait for dinner, as pasta was an all-time favorite food. I imagined the sauce to be thick and full of tomato flavor, much like Sunday sauce. Oh, I couldn’t have been more wrong.
I had never tasted sweet spaghetti before that night. Sauce is not supposed to taste like candy. The noodles were limp and slippery, and I ended up with more on the kitchen floor than in my belly. Let’s never mention those meatballs, because I could have used them to play jacks. After that experiment, I returned to my faithful old Salisbury steak.

The first TV dinners were sold as a “frozen meal” by Swanson and Sons in 1953. In a year’s time, Swanson’s sold more than 10 million TV dinners to the public. A year later, the company was purchased by Campbell’s and began to sell over 13 million TV dinners annually. As time went on, however, the company sold less of their items because the public desired restaurant take-out food to home cooked meals, especially as more two-income families became the norm. In the late 1990s, Swanson’s was rebranded as Pinnacle Foods. The “Hungry Man” name was kept on TV dinners, though the Swanson name was kept on frozen pot pies and their line of broths. I will need another column just to extol the wonders of a hot chicken pot pie on a cold winter’s night, especially since I have a scar on the roof of my mouth as a constant reminder.

If you head over to Facebook in your spare time, you can do a quick search for Swanson’s. Campbell’s Soup is responsible for the page. Most posts are recipes using Swanson broths. Easy Pepper Steak, Sweet Potato Soup, Pork Tenderloin and Chicken Biryani are just a few of the many wonderful recipes that can be created with Swanson’s delicious broths and stocks. With more folks at home, it stands to reason that TV dinners might become a thing of the past, while creating wonderful home-cooked meals for yourself or your families may be a pleasant “side effect” of what has been often named “the new norm.”

Visit www.campbells.com for more information about Swanson’s products and recipes that you can create at home. Bon appetit. 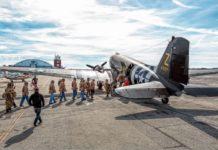