On the back of Chris Hillman’s new memoir Time Between: My Life As a Byrd, Burrito Brothers, and Beyond, the septuagenarian’s late friend Tom Petty is quoted as saying, “Chris was a true innovator—the man who invented country rock. Every time the Eagles board their private jet, Chris at least paid for the fuel.” It’s far from hyperbole as you delve into Hillman’s story about growing up in rural San Diego County and going from riding horses, surfing and exploring the outdoors to getting the music bug when his sister returned from college with records by Bill Monroe, Woody Guthrie, Lead Belly, The Stanley Brothers and Flatt & Scruggs.
And while Hillman’s musical path went from playing in local groups like The Scottsville Squirrel Barkers and The Golden State Boys (which also featured future country music legend Vern Gosdin) to international stardom as a founding member of The Byrds, Hillman’s tone throughout his book is one of humility and gratitude that’s a heartfelt and deep conversation with the reader. Those seeking a salacious rock and roll tale are advised to look elsewhere. No surprise given that the devout family man, who has been with wife Connie Pappas for 41 years and has two children and as many grandchildren, initially embarked on this project as a keepsake for his family and a means of setting the musical record straight. 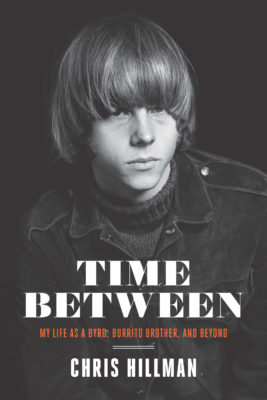 “I had started the book several years ago and the initial idea was to leave a history behind of what I did,” Hillman explained. “I kept reading such terrible and inaccurate stories about The Byrds and [The Flying] Burrito Brothers. And [how] The Flying Burrito Brothers centered around Gram [Parsons]. I finally decided that I was there and was going to finally write about what I did in music and all of the above.”

Hillman’s foray into authorship came during a tour for 2017’s Bidin’ My Time, a solo project co-produced by Petty. And while BMG editor Scott Bomar gave the green light to publish the Rock & Roll Hall of Famer’s manuscript, 2017 ended on a downturn for Hillman, whose Ventura home burned down on his seventy-third birthday, fewer than two months after the sudden passing of his close friend Petty. Hillman wouldn’t revisit his project for another year as he dealt with all this loss. A respite came from Roger McGuinn who suggested to his old band mate that they embark on a 50th anniversary tour commemorating the release of the groundbreaking 1968 Byrds album Sweetheart of the Rodeo aided by Marty Stuart and His Fabulous Superlatives.

“It really was a beautiful gesture on McGuinn’s part,” Hillman said. ““Roger had already gone out on the road and done shows with Marty and he asked him what he thought about doing a Sweethearts tour as a way of getting me moving again since I had a tough couple of months. [Roger] was in South America when he called to make the suggestion and it took me about a minute to respond. I said I was in and wanted to know when we’d start. Then Marty calls me, says he’s right there and totally on board.”

The critically acclaimed sold-out 2018 tour rejuvenated Hillman and allowed him to get back to his book. While the book is peppered with plenty of Forrest Gump-like anecdotes featuring the likes of Henry Fonda, Victor Mature, Miles Davis, Bob Dylan, The Beatles and Joey Bishop, personal turning points are what make Time Between truly resonate. None more so than the suicide of Hillman’s father when his son was 16.
“With my book, I was addressing coming out of a terrible family situation that I had come to grips with but in the first 30 years after my father died, I was angry,” Hillman recalled. “Suicide will do that to you because he was a good guy and a really solid great dad. That’s why I’m alive. What my mother and father taught me, my brother and two sisters was being responsible, working hard and having some sense of morality and value paved the road to success.”

Hillman’s musical journey explores the complexity of his relationship working with Gram Parsons in The Byrds and The Flying Burrito Brothers and finding latter-day contemporary country music success with The Desert Rose Band. When asked about his hand in straddling rock and country, Hillman explains the first instance predated Sweetheart of the Rodeo.
“I think ‘Time Between’ [from 1967 Byrds album Younger Than Yesterday] ranks as one of the first country-rock songs, in that it was backbeat with electric guitar, it was country, it had a bluegrass groove and Clarence [White] was on it,” Hillman said. “Poco came along right when The Flying Burrito Brothers came along as well as Dillard and Clark. That all came after Sweetheart, which opened the floodgates for West Coast, country-type sounds.”

Both in the book and in conversation, Hillman admits he could have easily become another rock and roll statistic where it not for the dual influence of faith and family.
“I find embracing the Christian faith was so helpful to me as it is still today,” Hillman said. “The book was redemption. I’m not saying to read this book because it’ll help you necessarily get through life. But I have to hand it to my wife and family. And that’s what counts. Everything else was great, but I wouldn’t swap my family for 10 hit records and all the money in the world. It’s not some corny, noble sentiment. It’s the truth.”

Click here to read about Chris Hillman’s favorite songs that he’s recorded throughout his career.