Hicksville Volunteer Fire Department Chief Gary Lewis recently announced the final plans to commemorate the twentieth anniversary of September 11. The Hicksville Fire Department will commemorate the somber anniversary on Saturday, Sept. 11, at the Strong Street Fire Station memorial. The memorial was erected in memory of Ex-Chief Terrence Farrell and Honorary Chief George Howard, both who lost their lives while performing rescue efforts on September 11, 2001. Farrell, a member of Citizens Engine Company 3 and elite member of the New York City Fire Department, Rescue 4 and Honorary Chief Howard was an ex-Captain of Emergency Company 5 and member of the Port Authority Police Department working out of JFK Airport in the Emergency Services Bureau. 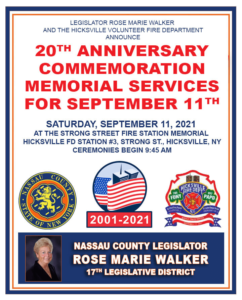 This year, the ceremony will take place on the actual day of when the attacks took place 20 years ago. The memorial program will be kicked off when Lewis and his members march to the memorial at the corner of West John Street and Strong Street. Once Lewis calls his detail to attention, the ceremonies will begin. Invited guests and members of the community will pay solemn thoughts and pay tribute to Farrell, Howard and members of the Hicksville Community who died tragically.

The ceremonies start promptly at 9:45 a.m., with a presentation of colors under the American Flag detail by its Hook and Ladder apparatus and feature remembrances and prayers offered for the departed, by Pastor Rev. Jamie Aguilera. The ceremonies generally last about 45 minutes and will again this year the department feature a special remembrance in memory of those Hicksville residents that perished that fateful day. Additionally, there will be two pauses during the ceremony, one at 10:03 and the other at 10:28 a.m. These two pauses will signify the collapse of the North and South Towers of the World Trade Center.

The Iglesia Cristiana Manantial Abierto congregation will provide musical selections and prayers during the ceremony. The program will include a member of the military playing “Taps” when the wreaths are placed by the Officers of Company 3 and 5. Residents will be offered the opportunity to lay a single carnation at the base of the memorial at the conclusion of the ceremony.
“As I reflect on this day it is with a heavy heart that we honor those lost on Sept. 11, 2001,” Lewis said. “We remember, and we will never forget, the nearly 3,000 lives taken from us that day and the thousands of lives since 9/11, due to illnesses that were a result of that fateful day. Lewis continued by recognizing that “twenty years may seem like a long time, but for the families who were lost, we must continue to honor the courage of those who put themselves in harm’s way to save people they never knew”.

“The program allows the department to come together in prayer and in gratitude for the strength that has fortified all of us across these 20 years”, Ex Chief and Chair Karl Schweitzer said. “We renew the love and the faith that binds us together as one American family, deeply affected by that day.”

“Now is the time to remember those that were taken from us and to thank those whose memory kept us from falling down. It’s been a long, hard road since 9/11 that we must recognize each and every year so that they will never be forgotten” Board of Fire Commissioners Chairman Robert Dwyer said.

The Hicksville Fire Department invites the families of those who once called Hicksville home to participate in the program. If any family members are interested, they should contact Chairperson Karl Schweitzer at 631-404-7791.