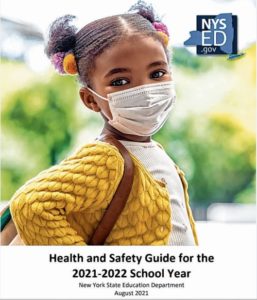 When it comes to things like mask mandates or vaccination requirements for students and teachers, there are no easy answers and plenty of controversy.
There are videos of parents angrily protesting masking requirements for their kids. In New York City, some teachers have declared they will not comply with Mayor Bill de Blasio’s mandatory vaccination requirement for instructors. Southern governors like Ron DeSantis in Florida and Greg Abbott in Texas have courted controversy by forbidding masking in schools and vaccine mandates.

Some argue local school districts should have more control on how they handle reopening, since they best know their condition. But ultimately, the state’s health and education departments, at the direction of the governor, will decide policies.
New York State Governor Kathy Hochul, on her first day in office, Aug. 24, stated, “My number one priority is getting children back to school and protecting the environment so they can learn safely. I am immediately directing the Department of Health to institute universal masking for anyone entering our schools, and we are launching a Back to School COVID-19 testing program to make testing for students and staff widely available and convenient. We are also working to require vaccinations for all school personnel with an option to test out weekly, and we are going to accomplish all of this by working in partnership with all levels of government.”

The requirements apply to private schools as well, and the Department of Health is expected to issue regulations shortly.
The governor, according to a press release, “will also pursue options to mandate vaccines for school employees or require weekly testing in the absence of vaccines, and will continue to work with the Department of Health, education stakeholders and the legislature on establishing the mandate.”

On Aug. 25, appearing on CBS This Morning, Hochul observed, “What I don’t have is the ability to mandate vaccines because the legislature did not confer on the governor at this time the executive powers necessary. Governor Cuomo had that last year, but those are not in place now. So I can’t mandate that right now, but I am working already with everyone who’s involved and see if we can get to the same outcome.”

In the same interview, asked about her plans to battle the pandemic in schools, she replied, “Well, first of all, parents are very stressed out about school right around the corner. I’m a mom. I can understand the stress levels are off the charts. So we have to first of all have mandatory masks, which is something that is not universally popular, but I think it’s an important step toward getting safety in schools.”

At least one major teachers’ union has come out in favor of Hochul’s plans. New York State United Teachers President Andy Pallotta issued the following statement: “We support universal mask wearing as part of a layered mitigation strategy that also includes robust COVID testing, contact tracing, proper ventilation and other strategies recommended by public health experts. We also support the governor’s move to require regular COVID testing for school staff who are not yet vaccinated. It’s critical that educators continue to have a voice in the implementation of vaccine requirements and other COVID policies.”

Assemblyman Ed Ra (R-Franklin Square) said he was “appreciative of Governor Hochul’s desire to establish a significantly different tone and operation than the previous administration. In particular, [Hochul] recently stated she would combat COVID-19 with a more collaborative approach instead of top-down decision making. The new policies announced [Aug. 24] would benefit from such an approach.”
He continued, “Throughout the 2020-21 school year, I heard from parents who were frustrated by the one-size-fits-all approach that proved to be too rigid to changing circumstances and was subject to the whims of the governor alone. It was made clear earlier this summer from the state that local districts would be empowered to make decisions based on what is best for their school communities. It was understood they would be in direct consultation with local health officials. Now, days before the start of the new school year, new mandates have been announced without details. I urge the governor to respect local control wherever possible and to go through the proper legislative process when adopting statewide policies rather than reverting to the process of her predecessor.”

Vaccines For Kids
According to the American Academy of Pediatrics (AAP), about 4.5 million children have been infected with COVID-19 since the pandemic began. Studies have suggested that they are less likely than adults to become seriously ill. However, with the advent of the Delta variant, the number of seriously ill children has risen. Per AAP stats, about 180,000 children have been infected one recent week.
Children ages 12 to 15 are eligible to receive the Pfizer-BioNTech vaccine. Previously, it was the only vaccine available for 16- and 17-year-olds. The Moderna and Johnson & Johnson vaccines are only available to those 18 and over.

According to the state COVID-19 vaccine demographics page, 57.5 percent of the population in ages 12 to 15 has received at least one dose.
All three companies said that they are studying their vaccines in younger age groups, with the eventual aim of giving those as young as six months the jab.

Pfizer-BioNTech stated its study in children ages 5 to 11 should be completed this fall. The one for younger children will be done early next year.
Moderna said of 3,700 12- to 17-year-old study volunteers who were given its vaccine, no one developed the virus.
In a statement, state Health Commissioner Dr. Howard Zucker said, “Our highest priority is helping to ensure the health and safety of our students and educators as we work together to combat COVID-19. Since early July, COVID-19 cases in New York have risen tenfold and 95 percent of sequenced positive cases were confirmed to be Delta variant. Based on incidence and prevalence, our findings demonstrate the necessity of layered prevention strategies, including this mask requirement. While a simple measure of prevention, requiring masks now is crucial for protecting the health of our children and ensuring we can get our students back in their schools this fall.”