Within the next few weeks, Veterans Day will be upon us. Veterans Day, which falls on Nov. 11, is the day we honor military veterans and those who served in the U.S. Armed Forces. Originally called “Armistice Day” when it began as the commemoration of the year anniversary of the end of World War I in 1919, Congress declared it a national holiday in 1938 and extended the honor to all who served in the armed forces. In 1954, Armistice Day was renamed “Veterans Day.” 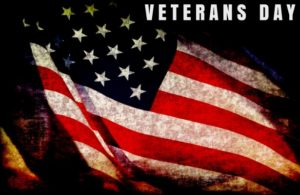 The weather will certainly have a nip to the air, which means that it will finally be time to cover the picnic table and remove the canopy that hangs over it. It was our original intention to ask our daughter to stop by for a barbecue, but we realized that the weather might be a bit too raw to sit outdoors. We have been spoiled by the late October warm temperatures, but we’re enjoying those temperatures on borrowed time. Soon, the frost will set in and those vegetables that are still growing in pots will freeze and shrivel.

After a quick peek in the yard at the eggplant and peppers that are still producing vegetables, I glanced over at Hubby, who was fully engrossed in the fifth episode of HBO’s war drama non-fictional miniseries, Band of Brothers. Commentaries followed or were a prelude to each episode, which gave one a better understanding and more compassion for the men who fought in World War II. Based on the nonfiction book which bears the same name, it starred Damian Lewis, Donnie Wahlberg, Scott Grimes, Colin Hanks, David Schwimmer and Dale Dye, among others. Every episode was riveting and compelling and during many episodes, heartbreaking. While this has been at least the tenth time that we have watched the miniseries, it feels like the first time, especially during the scene where Bunk finds his friends in the snow. Appreciation for what circumstances soldiers endure for the sake of our freedoms that we hold so dear is the biggest takeaway from the series and from this weekend’s day of remembrance. Hubby enjoys the series and often will find it through on-demand services. 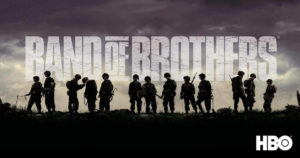 During one of the episodes, we noted famed war movie actor Dale Dye in one of the scenes. I mentioned to my husband that he appeared to be typecast, for he was in many war films that we had watched together. His most notable performance to date was his role as Captain Harris in the Oliver Stone classic film Platoon, where he has been quoted with stating, “Dump everything you’ve got left on my POS. I say again, expend all remaining in my perimeter.” The line always gives me chills.

Hubby was quick to announce that Mr. Dye has been credited as a technical advisor and is a decorated Marine veteran of the Vietnam War. He is also founder and head of a technical advisory company called Warriors, Inc., which specializes in realistic military action portrayals in Hollywood films. Of note are the medals he was awarded, such as the Bronze Star Medal with Combat “V”, the Purple Heart, the Meritorious Service Medal and a Navy and Marine Corps Commendation Medal, among others. Hollywood filmmakers are wise to call upon Mr. Dye’s expertise, as he has 20 years of service and has seen many years of combat in both the Vietnam and Lebanese Civil Wars. Of note is the fact that he failed the U.S. Navy entrance exams three times and enlisted in the U.S. Marines as a combat correspondent because of his superior observational skills and literary interest. Dale Dye’s abilities as an actor and a soldier are perfect examples of a soldier par excellence.

We have many soldiers of excellence in our town and surrounding neighborhoods who have fought in various wars. It takes strength of character, bravery and courage under fire, as well as a keen sense of fortitude for soldiers to endure conditions of wartime. It is vital for us to remember that those men and women served to keep us free. As it has been said often, “All gave some, but some gave all.” I cannot stress this statement’s importance enough. We cannot desensitize ourselves to the fact that others have died so that we may speak, write, act and be free. While Veterans Day is not about the fallen, we still honor and remember while we celebrate those still with us.

Many years ago, my husband and I celebrated our wedding anniversary in the Pocono Mountains. We stopped at a gas station in Mountainhome for some snacks and a quick fill-up and found that we could not exit the station. The road had been closed off while we were fueling our vehicle and the locals held their annual Veterans Day Parade. It was quite heartwarming to watch as surviving veterans marched proudly down the street. The crowd, which consisted mostly of those in vehicles as the road was quite busy, was lively and whooped as each veteran passed by. Some waved tiny flags from their windows as those brave veterans walked through the misty morning. As the parade wrapped up, a few military vehicles pulled up the rear, along with an old fire truck. It was a beautiful way to honor local veterans.

This Veterans Day and in the days thereafter, let us make a practice of appreciating those who served bravely. May we remember that Veterans Day is not about sales, shopping and just another day off from work. Veterans Day marks a time to honor those who fought bravely that we may be free. It is a day for those who saw things no human should ever see to be honored and cherished. As President Woodrow Wilson stated in 1919, “To us in America, the reflections of Armistice Day will be filled with solemn pride in the heroism of those who died in the country’s service and with gratitude for the victory.” Happy Veterans Day to all. I am so grateful for your service.