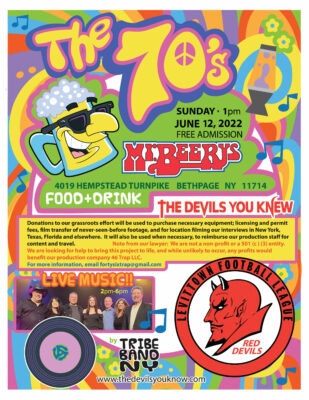 On Sunday, June 12, documentarian Doug Delaney will be hosting a fundraiser for his upcoming project, The Devils You Knew. This is a story far more complicated and layered than just “kids playing football” and that is why in January of 2019 Peter Hand, Doug Delaney (former team members) and Jamie Nelson (former Red Devil Coach) embarked on a mission to tell the entire history of that team, those times and all the supportive, colorful and often controversial citizens of Levittown.
In 1971 and 1972 (under the tutelage of coaches Jim Tintle, Bobby Perpall, John Dybus and Rich Festante), the team would make Long Island Youth Football History—outscoring their opponents 443-69, achieving a win loss record of 20-1, capturing the Long Island Midget Football League (L.I.M.F.L.) title two years running and defeating Bowl Opponent All-Stars in Maryland 54-0.
And the competition was fierce. Out of the 110 Youth Football teams spread across Long Island from Queens to Montauk, 4000 young athletes in five age and weight divisions battled for the coveted Division Championships.

Since the population of Long Island at the time was as large as the 11th most populous state, the Red Devils accomplished the equivalent of being the state champs of Florida, Indiana, Massachusetts or New Jersey.
This in itself may not seem to some as extraordinary, considering there were hundreds of talented youth football teams across the nation—but what makes this team special is the manner in which they accomplished what they did, amidst very turbulent and troubling times.

These were “just kids,” the offspring of first- and second-generation Levittowners, whose fathers were veteran servicemen almost to a man. While their dads were busy policing crime-ridden, decaying and nearly bankrupt New York City, extinguishing massive fires in the South Bronx, and erecting the World Trade Center, their moms, both working and stay-at-home, kept the home fires bright and burning, sustaining the 19,000 homes of the nation’s first true suburb.

Though the on-field accomplishments of these teams is unparalleled in Red Devil and even the defunct L.I.M.F.L. history, it was the off-field lessons and contributions to the lives of these young boys that resonates to this day. Not the least of which was the entire community of Levittown—the volunteerism, generosity and sacrifice of Levittowners (whether their kids were associated with the Red Devils or not) was truly a grassroots endeavor that gave these young athletes the support they needed to succeed beyond all expectations.

Admission is free to this upcoming event being dubbed The ‘70s with doors opening at 1 p.m. at Mr. Beery’s in Bethpage. There will be food and drink with music provided by Tribe Band NY from 2 to 6 p.m. Donations for this grass-roots project are welcome and deeply appreciated. Mr. Beery’s is located at 4019 Hempstead Dr. in Bethpage. Visit www.thedevilsyouknew.com for more information about the film.